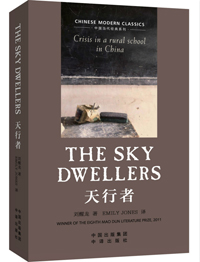 Born in 1956 in Tuanfeng in Hubei province, Liu Xinglong's works include eleven novels and twelve collections of short stories. Some of his novels have been translated and published in English, French, Japanese and Korean. His novel The Sky Dwellers won the 8th Mao Dun Literature Prize, while his Holy Heaven's Gate won the first Academy of Contemporary Chinese Literature Prize and the second China Novel Society Novel Prize. He has also won the Lu Xun Literature Prize for a novella and Taiwan's United Literature Prize.

About the book:
The Sky Dwellers describes the lives and struggles of primary school teachers in Jieling, a tiny, fictional community nestled high in remote mountains in China. These teachers are not state teachers, with regular salaries and pensions to look forward to. They are, instead, community teachers (or "minban teachers" - a term which literally translates as "people-supported" teachers) whose wages are paid by the local community and who might not have received much beyond primary school teaching themselves. During the 1960s, 70s and 80s, most children in China were taught by minban teachers. From the early 1990s onwards, the role was gradually phased out, and some minban teachers were lucky enough to become state teachers.

A minban teacher's life was one of poverty. State subsidies provided only part of their wages and local cadres were supposed to make up the rest from often very limited village funds. But often the cadres did not pay on time, or at all. Inevitably, this would result in tensions - a theme explored in this novel.

Each of the teachers in the book responds differently to the pressures of life as a minban teacher. But the novel is not just about the teachers' lives, it also deals with the impact they had on the children and the community they served. Set in the 1990s, a time of great social and cultural change in China, The Sky Dwellers is a compelling, personal and moving account of a part of China's recent past which is often overlooked.